Taxonomy. That's what sets Drupal apart, and makes it so much more useful than many of its alternatives. But it's unduly intimidating at first: let's peek under the hood to see how to take advantage of it.

The taxonomy mechanism is the heart of what makes Drupal so different from most other content management systems. But experience in the drupal support channel shows it is not always well understood.

First things first, although the service provided by the taxonomy mechanism ("categories" at various places in the Drupal UI) is simple, the implementation requires no less than six tables (see diagram) for basic features:

There is an implied integrity relationship : node/type must match vocabulary_node_types/nodeType for every instance of term_node/tid. This is currently implemented in code by drupal modules.

In the current implementation (4.6.4), even if hierarchy is not used, each tid will also have at least one row in this table, with parent = 0, to show it is a "root" node. It may have more than one parent, which prevents replacing the term_hierarchy table by just a parent column in the term_datatable. IMHO, since this is essentially an implementation artefact that costs significant data space, it does not seem poised to remain in place for very long.

As questions on the support channel suggest, the use of drupal categories, as implemented by the taxonomy module may not be guided enough: I had a case yesterday where the user wanted additional code to prevent terms in one category (i.e. vocabulary) to be used on a node along with other terms from another category on the same node. In most cases, this points to an information architecture problem at a higher level: if terms are mutually dependent, like these terms that had to be exclusive, then they belong in the same classification axis, meaning the same vocabulary.

This is where the hierarchical nature of Drupal classifications comes in handy: instead of defining a set of specialized vocabularies with dependence on other vocabularies, all it takes is for one to define a hierarchical vocabulary, within which specialized subtrees will be implemented as children of higher level terms, thus ensuring mutual exclusion.

In short, if there is one only word to remember when designing an information taxonomy, or in layman's terms when configuring categories on Drupal, this word is orthogonality. Proper orthogonal category design will often save a lot of time implementing case-specific rules in code.

There is an introduction to the concept in the "Derived meanings/Computer Science" section on orthogonality at wikipedia.

Although the taxonomy system in 4.6.x Drupal is geared towards use in nodes, it can be put to other uses. As a proof of concept, Karoly Negyesi (aka Chx) has created the "userstag" module enabling the use of taxonomies on users. Use your favorite search engine to query for drupal userstag chx for the current URL. This module uses a term_user, similar in purpose to the term_node table in regular taxonomy use. Note that this is NOT supported code, or even contributed code, and as such should not be used on a production system unless you are ready to maintain it or have it maintained.

Warning: the previous version of this post contained an error, noticed and fixed by Killes (confusion between synonyms and related terms). Thanks to him 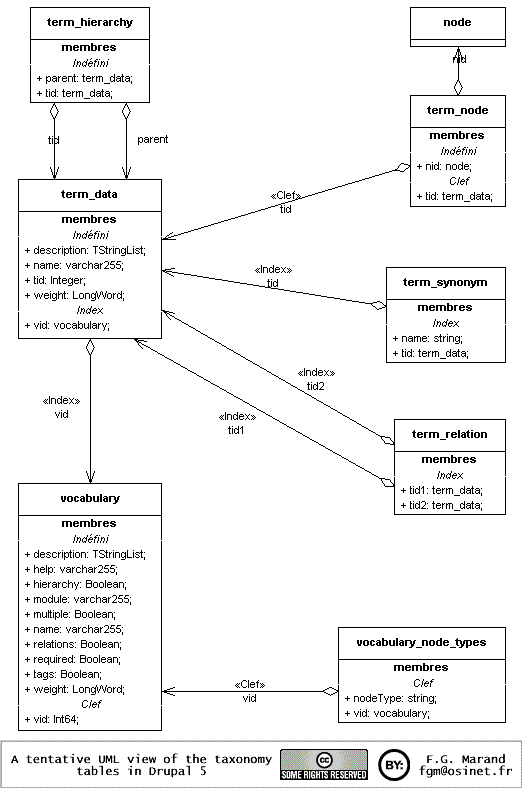 2005-11-28 - Update : this page, as well as other in the Grokking Drupal series of my blog, is now available on drupal.org. The version on drupal.org will probably be updated with time, whereas this one probably won't be.

"This module uses a term_data, similar in purpose to the term_node table..."

Um, wouldn't that conflict with the main term_data table that's the core of the vocabulary schema? Is that the right table name?

There was a typo: it's term_user, not term_data. I've changed it in the body of the post.

Clarification on the data model

Maybe this is not too clear, but the data models as I represent them on diagrams like this one is a logical one. It does not map character for character to the phyisical implementation: for instance, you can see the type of some variables as being a StringList, which is not even a PHP type.

In the case of vocabulary_note_types, this abstract field name maps indeed to the type column in the MySQL physical model.