Music
From the bass

About six months ago, I started our spring concerts series with a brand new set of Elixir medium bass strings, based on the various recommendations I had found regarding these, centering notably on their long life span. In spite of the various warnings I had read about their peculiar tone, I thought I'd give them a chance to prove their worth.

Well, suffice to say that this life span argument may not be valid in all situations, as the photos (click for larger view) demonstrate.

So what happened ? Elixir, like some other manufacturers, wraps its strings in a non-metallic coating, in order to protect them from oxidizing while keeping the non-coated sound brightness, which coating typically removes. And, apparently, this coating, which is adequately non-sticking on the finger side, is not really sticking enough on the string side, causing it to be torn after some play.

How long does it take ? I can only suppose it depends on the player, but in my case, these photos were taken after about six months, meaning more of less 150 hours of use. 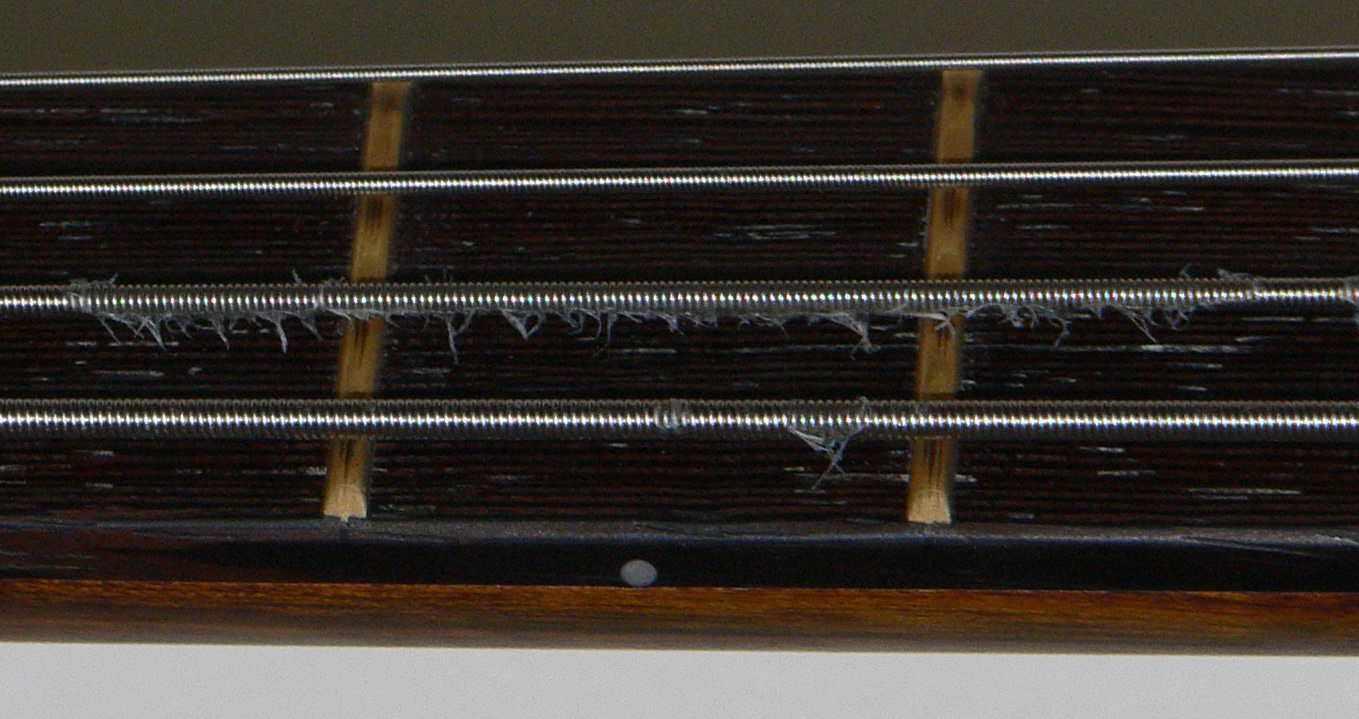 Chatting with a knowledgeable music store clerk, he appeared to be aware of the problem, describing it to me as soon as I said I had a problem with the strings, without my telling what that problem was: it is apparently a well-know issue: these strings are indeed long-lasting when played very little, as is typical of amateur musicians, with the coating adequately protecting them from oxidation. But on the other hand, frequent and/or rough playing tends to wear the coating off the string, giving them that unpleasant look. OK, then, so be it.

Next brand to be tested: DR Strings, allegedly better fit for more intensive use.

This being said, I'd like to obtain the opinion of other bass players: have you had similar experiences with Elixir strings, or did I (and this store clerk) stumble upon a defective series ?

UPDATE 2007-10-29 : the reason why I'm still considering the possibility of a defective series is the fact that the A string, which has by far the most damaged wrapping, does not seem to be one I use most ; IMO, this has to be the D string, but that one looks almost pristine.

Were you playing with a pick? I did once and my strings looked frayed. I also seen the neck area. Could it be the acid in sweat? I have had the same Elixir Strings on 3 of my basses for 6 to 8 months and they don't look anything like that. I play at church every Thursday and Sunday and in a cover band that practices Mondays and Wednesdays and plays Fridays and or Saturdays and the strings still sound and look great. My guitar player from the cover band loves to play on my basses and he kills my strings everytime. They deaden out after he plays them. He sweats a whole lot. He smokes and drinks and thats why he kills my strings. He is forbidden to play any of my basses. (lol) I don't smoke nor drink and my Elixir strings last for 6 to 8 months sometimes.

What our body takes in, will also come out through our pores. Foods with high acids will deaden and strip your strings. Also nicotine and alcohol comes out through the pores. That too will kill strings.
Could be your diet? Spicey foods?

Just a thought not necessarily your case.

Hi. Thanks for your

Hi. Thanks for your suggestions: the first cause seems most likely for the microphone area, as I use a pick on about 1/10 of our songs, while the other suggestions don't really apply.

It still doesn't explain the case of the coating peeling off along the neck, though. AIUI, this coating if basically PTF, which is highly resistant to acids (it's constantly being aggressed at high temperature by the fatty acids used in cookware, and stil resists). Or maybe there's something specifically problematic for this coating in the lemon oil I use to care for the neck (Dunlop Fretboard 65 Ultimate Lemon Oil) ?

One thing that may be worthwile to note in this issue is the fact that I tend to play hard with the right hand, and do a lot of hammers/pull-offs with the left: my teacher is always urging me to play more softly, so maybe it is strictly a mechanical issue. No such problem with the DR, obviously, but there's another problem with them, which I'll explain as soon as I find the time.

Hi, I put a set of Elixirs

Hi, I put a set of Elixirs on one of my basses about a year ago now, and the only string that the coating frayed on was the A, and even then, it was on the neck area, not closer to the bridge. I've heard people say that Elixir's quality control isn't great, so I reckon this is probably the cause.

My experience with Elixir

I stumbled on this blog while looking for online salespoints to buy Elixir cheaper. In Belgium they cost about 70€ (=95$) for a fourstring set.

Now I still keep on using them because I do + 2 years with a set. I'm not an extensive player, but still. Two rehearsels a week and 20 gigs a year is what my Elixirs endure. And my strings look like your pics after a year, but since it doesn't effect tone, I just keep on playing for another year.

So, it depends on who you are and what you want. In my book, Elixirs are the best ever !

I've gone through at least 8

I've gone through at least 8 sets of Elixir Bass strings over the past 2 years. What you see on your A string has happened to me twice. I believe that Elixir may have had a manufacturing problem last year (2007) as I haven't seen a reappearance at all in 2008.

I recently tried some DR Extra Life coated bass strings. They immediately feel better under my hands and have a better tone. The color does fall off on some areas but the tone has been consistent after the third day. I look forward to your DR string review.

well, 6 month are way more than what usually strings last... I change roundwond strings on my basses about every month, and with Ernie Ball, it's just two weeks (and I don't like the sound of "brand new" strings, I do prefer the flatwound sound, wich I use on most of my basses).

with every set of roundwound strings, the far I can go is one month, if I don't play a lot, an then they sound like rubber bands (so, as I said, not a good "old strings" or "flatwound" sound).

if those Elixir lasted you six month before degrade of the coating web... they are winner for me.

I use Elixir on my acoustic guitar like since 2003, and I change them when it's time, and it can be years or months, depending on how much I play.

but six month for constanlty used bass strings... for me it's a winner.

Well, 6 months are way less than most strings last me. Currently, I'm using a non-coated GHS set over two years old, although I play more than I did at the time I wrote that post, and probably play harder than I used to. Maybe I don't need to care much for the raw sound because of how much processing is done by my pedalboard (Bass Pod XT Live), including distortion ; what matters most to me these days is sustain and feel to the touch, but if you are into a clearer sound, I can definitely see why that would be important.